Another post, and another new track – Song3 the 8th track from the album – Make Music has been posted to SoundCloud and is available for you to listen to below:

You might be wondering why Song3 is called Song3 instead of Song8..after all, it is the eigth song on the album. This is because the origin of Song3 is a group of three songs that I wrote for what was going to be a band with a few friends. The band died out, but I ended up liking Song3. By that point, it was pretty much how I knew the track, so I thought there was no point in renaming it. And that is how Song3 got its name.

That’s all for now. Hope to post another track later this month!

Welcome to the first post of the year for A Rising Force – we’ve got new tracks for you! It’s been a while since the last update and we wanted to let you know the status of the album – Make Music. We’re still in production, but in the meantime, we wanted to release four of the new tracks that are finished.

These are the four tracks that we referenced in the previous post – Tour, Bright Eyed, Anyway… and Pickmeup; they were all mixed at the end of last year. While Tour, Bright-Eyed, and Pickmeup are mostly cleaned up and polished versions of the existing songs, Anyway… has evolved quite a bit since the last time I shared it. There is now a viola/violin string section that comes in about a minute into the song and adds a lot more depth. Please let us know how you like the new version in comments on SoundCloud! 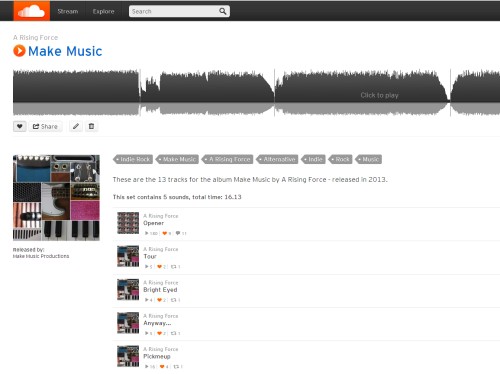 While only a little less than half the tracks have been posted, the album is now more than halfway finished being mixed and more tracks will be posted in the coming weeks. The total number of complete tracks for the album is now up to five of thirteen. The next tracks that will be posted are Song3 and For All The Days My Muse Called In Sick. Both tracks have final recordings and just need to be mixed and mastered.

Please make sure to like, comment, and share A Rising Force Music with your friends to help us reach new people.  Do you have a favorite track on the album?  Let us now by liking it on SoundCloud! We hope you enjoy the new tracks and can’t wait to post the rest of the album!

A Rising Force reached a milestone a little while back – there are now over one hundred followers (103 at the time of this writing) of A Rising Force on SoundCloud.  In just under three months, with only the demo tracks, we’ve been able to raise awareness of the band to more people than we could possibly reach in any other way.  Thank you to all of the supporters!  We look forward to releasing more music and reaching even more people – if you’re a fan, please help spread the word to your friends.

There was a slight delay in the mastering process for Opener due to some poor instruction following, but the track is finally in progress and should be completed sometime next week.  Once the band signs off on the final approval, the track will be submitted to iTunes, ideally in time for an early September release.  When there is a more concrete date for the release, it will be posted here.

I’ve posted the first of many updates to the production notes section of the site. Tonight, I added the recording history for Opener – which includes two demo tracks.

In choosing the best way to share the music, I researched a couple different options: SoundCloud and Mixcloud.  I decided to go with SoundCloud because it had upfront pricing and gave me a free plan to build off.  It also had a great plugin for WordPress that let me integrate it very easily into the existing pages on the site.

Now that I’ve picked a platform for sharing my music, I can start updating the recording history section on the production notes pages that are already online (Opener, Tour, Bright Eyed, Anyway, Pickmeup).  I also plan on posting a track review video where I discuss the songwriting and recording process for each song on the album Make Music.